Marcie Gray's love for music began at a very young age.  Born and raised in California, Marcie dreamed of relocating to the south to sing with her Uncle Alphus LeFevre and the LeFevre family.  Her grandmother, Omega (Peggy) LeFevre Kutz and grandfather, Harry O'Dell Kutz lived in Atlanta, GA, and later relocated to Jackson, TN, where Marcie spent many summers as a child.  That was where her love for the south began.  LeFevre Family Reunions were a favorite event each year, and led to many cherished memories with family, singing and laughing all throughout the weekend together.  Uncle Alf went to be with the Lord when Marcie was a senior in high school.  Those carefree days with the aunts, uncles and cousins are now a distant memory, but Marcie's love for music and the legacy left by so many of her family members inspired her to relocate to Tennessee in 2011.

Over the years, Marcie has taught voice lessons, directed choirs from preschool through adult ages, led worship services and been a featured soloist in concerts across the United States.  She homeschooled her daughters for six years, and was used to a very busy life.  As the girls grew older and more independent, Marcie began to get involved in the Southern Gospel music industry.  Supporting her cousin, Mike LeFevre with his ministry (The LeFevre Quartet) was a wonderful way to get involved, and what a blessing to be involved in ministry with her own family!  Gray Dove Ministries was launched in 2015, as Marcie's music ministry began to grow and more concert appearances were added to the calendar.

In 2016, after a year filled with tragedy, Marcie began a new business venture, "Marcie Gray Management and Design," to compliment her ministry income. Website design, graphic art, photography, artist management and publicity are just a few of the tools most artists need help with to make their ministries stand out.  Public Relations is a crucial part of any company, and the music industry is no exception to that rule. "Operating with integrity and excellence is our goal," says Marcie.  "We are excited to see the growth we have seen, and look forward to where the Lord takes us and our team of artists!"

Marcie is a cancer survivor, among other things.  God has given her a powerful testimony, and she has committed her life to serving Him by sharing the hope that comes from unwavering faith, even through trials that seem unending.  God has opened many doors for Marcie to sing and speak in new places, meet new friends and reach out to those who are hurting and need an encouraging word or someone to pray with them.  Marcie shared, "There is no greater honor than to be able to dedicate your life to doing God's work.  It's a calling, and one that requires huge sacrifices, for sure, but it's one I will never regret!

To God, be the glory! 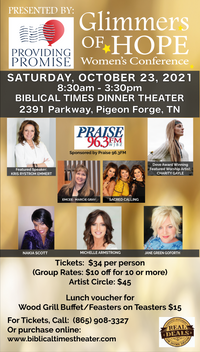 Healing of a Woman's Heart Conference